FMT Reporters | January 7, 2018
The decision ends months of speculations about the coalition's choice to head the government. 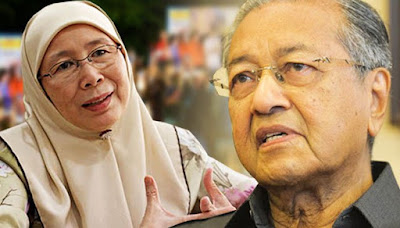 SF: The decision ends months of speculations about the coalition’s choice to head the government.
SHAH ALAM: Pakatan Harapan (PH) today confirmed Dr Mahathir Mohamad as its prime ministerial candidate should it win the next polls, the coalition chief secretary Saifuddin Abdullah announced today.
Meanwhile, PKR president Dr Wan Azizah Wan Ismail will be made the deputy prime minister.
The announcement made at the PH convention here ends all specualtion about the coalition choice to head the government.
The coalition also announced it would pursue all legal avenues to free jailed leader Anwar Ibrahim, with the aim of making him the eighth prime minister of Malaysia.
Saifuddin said the decision was reached yesterday by all the top leaders of the four parties making up the coalition.
The leaders also agreed the seats distribution among the four PH parties in Peninsular Malaysia for the next general election as follows:
PPBM: 52 seats
PKR:    51 seats
DAP:    35 seats
Amanah: 27 seats
Saifuddin also read out 13 major reforms the coalition said it would implement immediately once it comes to power.
Among others, PH promises to:
* reform the Parliament to make it into an independent institution
* take immediate steps to restore the economy
* undertake comprehensive institutional reforms including educational and social reforms
* limit the term of the prime minister
* make top public posts such as the chiefs of the police, Election Commission, Malaysian Anti-Corruption Commission, as well as the auditor-general and attorney-general answerable to Parliament, and appointed directly by the Agong.
* Ensure agencies such as Felda, Tabung Haji, Employees Provident Fund and MARA are transparent and efficient
* Close the gap between rural and urban development, and fulfil the rights of Sabah and Sarawak based on the Malaysia Agreement.
* Uphold the constitution, the status of Islam and the Malay language, and guarantee the rights of all religions.
Posted by Unknown at 5:54 PM