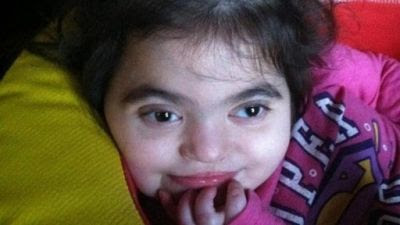 Amelia "Mia" Rivera has Wolf-Hirschhorn syndrome, a complex genetic disorder that causes mental and physical impairments, and her family said that the 3-year-old will die if she does not get a kidney in the next six months to a year.

Mia's mother Chrissy Rivera has said the family is willing to donate a live organ, but Children's Hospital of Philadelphia has reportedly told her that they will not recommend transplantation for the toddler because of her disabilities.

Rivera blogged about her daughter's plight last Friday, and now more than 20,000 online supporters from 15 states are petitioning the hospital to give the toddler the kidney they say she needs to survive.

"I didn't think it was going to be an issue," said Rivera, a 35-year-old high school English teacher from southern New Jersey who has two other children, aged 11 and 6.

When the family went to CHOP last week to discuss the transplant, Rivera said she "thought we were just finding out how transplant works and how we could be a donor."

"But then, I was told we couldn't because she was mentally retarded," she said. "Those were the exact words on a piece of paper."

Rivera said the doctor also mentioned the medication that Mia would have to take for the rest of her life and "how important it was she take it -- and who would make her take it when we weren't around anymore?"

"Everyone should be treated equally," she said. "This is outrageous."

About 35 percent of the children with Wolf-Hirschhorn syndrome do not survive beyond the age of 2, although several individuals have lived to adulthood. Rivera said that Mia has about six months to a year before she will die without a kidney transplant.

Rivera also argues that medical information about the syndrome is "out-dated" and there is now "hope" that Mia could well benefit from a kidney transplant.

The hospital would not respond to questions about the Rivera case, citing privacy laws, but provided a prepared release.

"The Children's Hospital of Philadelphia does not disqualify potential transplant candidates on the basis of intellectual abilities," it wrote. "We have transplanted many children with a wide range of disabilities, including physical and intellectual disabilities. We at CHOP are deeply committed to providing the best possible medical care to all children, including those with any form of disability."

The day before, CHOP said this on its Facebook page, "We hear you."

"We feel and understand your frustration, but we are unable to comment publicly on individual cases," it posted. "Each child is unique, and our goal is always to provide the best possible medical care for each individual patient."

She decided to launch a petition campaign through the website Change.org, which allows ordinary citizens to petition online.

"We had never met," Stilwell told ABCNews.com. "I read about what Chrissy went through and was inspired."

But Robin Charo, professor of medical ethics at University of Wisconsin, said CHOP's statement suggested their decision was not based solely on Mia's disability but "in compliance with with current norms."

"It is appropriate to decline to perform transplants that are medically contraindicated, but denials based solely on the presence of mental retardation would be a throwback to the practices 40 years ago when Down syndrome children were frequently allowed to die for lack of treatment of correctable conditions," said Charo.

Wolf-Hirschhorn syndrome occurs in about one in 50,000 live births. Health problems can vary from child to child, but some serious impairments include seizures, hearing loss and eye malformations, as well as kidney, brain and skeletal abnormalities. Heart disease and frequent lung infections are also immune deficiencies also reported.

Patients can be denied an organ transplant for a variety of reasons, according to the American Society of Transplant Physicians. Transplantation will not be offered to those would could be harmed by the surgery itself or by the immune-suppression that is required to prevent organ rejection.

Patients with weak immune systems or a high risk of infection, such as some children with Wolf-Hirschhorn Syndrome, cannot be immunosuppressed, according to those guidelines.

Some doctors have reported that patients with the syndrome have difficulty with anesthesia because their heads and mouths tend to be small, making it hard to place a breathing tube during surgery.

Patients with severe heart disease may have an unacceptably high risk during surgery. Also, those who are not expected to live five years may also be denied a kidney transplant.

Patients with severe intellectual impairment may be considered for transplant if the benefits outweigh the harms, say guidelines.

Rivera said that during the meeting with a CHOP doctor, he said Mia would not qualify fortransplantation.

"I put my hand up," she writes on her blog on the Wolf-Hirschhorn website. "Stop talking for a minute. Did you just say that Amelia shouldn't have the transplant done because she is mentally retarded? I am confused. Did you really just say that?"

Rivera writes that she was so upset that she burst into tears: "Niagara Falls. All at once. There was no warning. I couldn't stop them," she wrote.

Today, Mia cannot walk or talk yet and has a gastrointestinal tube because she is unable to eat by herself. "But she smiles and plays and recognizes us and loves her brothers," said Rivera. "They love to play with her."

Rivera said she is also convinced that research on Wolf-Hirschhorn syndrome is "pretty dated."

"Any mother wants the best for her child and will do whatever it takes to get it," said Rivera, "Mia isn't to blame for this. She didn't want ask for this syndrome and all we ask for is the right to fair medical treatment."