MOGADISHU, Somalia — Multiple explosions and a firefight erupted near the presidential palace here in the Somalian capital on Friday, in a deadly militant attack on the heart of the government.
“Terrorists tried to attack the presidential palace and the security forces foiled the attack,” Abdikarim Hussein Guled, the minister of the interior and national security, told state media. He called on the public to remain calm and promised to provide more information later.
The United Nations’ top envoy to the country said in a message on Twitter that the Somalian president, Hassan Sheik Mohamud, had survived the attack on the palace, known as Villa Somalia. “President just called me to say he’s unharmed,” said Nicholas Kay, the United Nations’ special representative for Somalia. “Attack on Villa #Somalia had failed. Sadly some lives lost. I condemn strongly this terrorism.”
Witnesses said a loud explosion was heard, followed by an exchange of gunfire and then a series of other explosions around Villa Somalia. Ambulances were on the scene collecting the wounded. 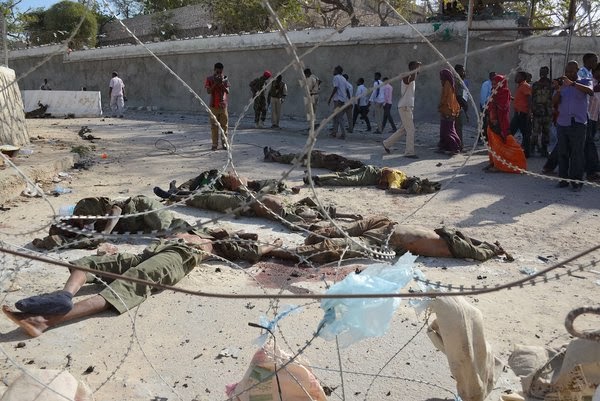 People walked past the bodies of seven Shabab rebels in front of the presidential palace on Friday in Mogadishu, Somalia.

Capt. Mohamed Hussein of the police told The Associated Press that the attack had begun with a car bomb, followed by militants attempting to shoot their way into the compound, where the president and the speaker of Parliament reside and have their offices.
“Somali National Security Forces foiled cowardly attack outside Villa #Somalia,” said the African Union mission in Somalia, known as Amisom, in a Twitter message after the attack. “Senseless attack was directed on innocent civilians as Friday prayers were underway in Mosques.”
Three suicide bombers tried to assassinate Mr. Mohamud in September 2012, as he was holding a news conference at a hotel with the visiting Kenyan foreign minister. Mr. Mohamud was not harmed in that incident either, but an African Union soldier was killed.
A spokesman for the Somalian militant group the Shabab claimed responsibility for the attack.
“Our commandos have attacked the so-called presidential palace in order to kill or arrest those who are inside,” the Shabab military spokesman Sheikh Abdul Aziz Abu Musab told AFP.
At least five people were killed and a dozen wounded last week when a car loaded with explosives blew up near the entrance to the international airport in Mogadishu, an attack believed to be aimed at a passing United Nations convoy. The Shabab also claimed responsibility for that attack.
“Al-Shabaab unsuccessfully trying to divert ongoing plans by #Somali National Forces & #AMISOM to flush them out of their remaining bases,” Amisom said in a subsequent Twitter message.
The Shabab came to prominence as a nationalist movement combating the United States-backed Ethiopian invasion of Somalia in 2006. The group seized control of large swathes of the country, including Mogadishu.
Somalian troops and African Union forces forced the militants back in recent years but for all their territorial gains have been unable to stem the tide of terrorist and guerrilla-style attacks. The Shabab recently even announced a ban on the use of the Internet in Mogadishu and areas under their control.
The tactics used in Friday’s attack have become all too familiar to security personnel in Somalia. On New Year’s Day a similar assault killed half a dozen or more people at the Jazeera hotel in Mogadishu. In one of the most devastating episodes, the militants detonated a pickup truck in front of the United Nations compound last June and then stormed the facility with gunmen, killing at least 15 people.
Police stations, the court complex in Mogadishu and restaurants popular with peacekeepers and government officials have all been targeted. The group demonstrated that it could project power beyond Somalia’s borders when militants armed with AK-47’s carried out a bloody siege at the Westgate shopping mall in the Kenyan capital, Nairobi, last September, killing more than 60 men, women and children.

In November the United Nations Security Council authorized an increase of more than 4,000 peacekeepers in Somalia, bringing the total number of African peacekeepers there to more than 22,000 while also expanding logistical support for the fight against the militants.

The Pentagon in December sent a small team of uniformed military advisers to Somalia to help provide logistics, planning and communications assistance to Somali and other African forces combating the group. They are the first American troops there since 1993, when 18 Americans were killed in an episode widely known as “Black Hawk Down.”

“This is another desperate and criminal act which does nothing but harm to the people of Somalia” Mr. Kay, the United Nations’ special representative, said in a statement Friday. “The Somali people are tired of shootings, bombings and killings. It’s time for a new chapter in Somalia’s history and we cannot allow a slide back at this critical time.”

Villa Somalia said in a Twitter statement, “Don’t be fooled by this ‘media spectacular’. This is another act of desperation from a dying animal.”
Posted by Unknown at 1:25 AM