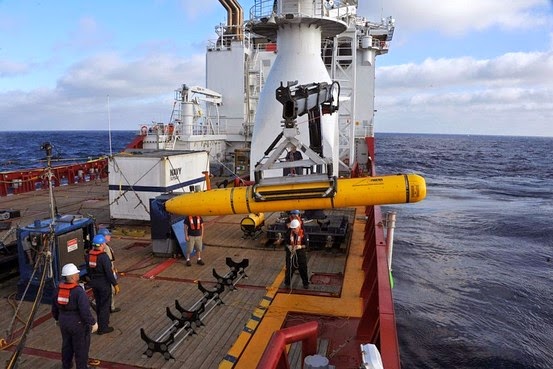 Crew aboard the Ocean Shield move the U.S. Navy?s Bluefin-21 autonomous underwater vehicle into position for deployment to look for the missing Malaysia Airlines flight 370

Initial data from an unmanned submersible launched Monday to scan the Indian Ocean seabed for wreckage of Malaysia Airlines Flight 370 revealed nothing related to the missing plane, authorities said Tuesday.
After completing about six hours of its first mission Monday, the U.S. Navy’s Bluefin-21 submersible reached its operating depth limit of about 3 miles, and its built-in safety feature returned it to the surface, underscoring just how difficult and protracted its mission is.
The primary goal remains recovering the Boeing 777′s flight-data and cockpit-voice recorders. But with no signals resembling those devices detected in the past six days, it was increasingly likely the batteries powering the emergency locaters were dead, prompting search crews to turn to the U.S. Navy’s underwater Bluefin-21 vehicle, which uses sonar to scan the ocean floor.
“I would caution you against raising hopes that the deployment of the autonomous underwater vehicle will result in the detection of the aircraft wreckage—it may not,” said Australian Air Chief Marshal Angus Houston, who is leading the multinational search. “However, this is the best lead we have and it must be pursued vigorously.”
The boundaries of the Bluefin-21′s search zone encompass roughly 500 square miles. The device moves at a walking pace, and scanning the entire search area was expected to take between six weeks and two months.
Even if the Bluefin identifies the “black box” recorders or other remnants, difficult decisions would need to be made about when to begin photographing wreckage and which portions to try to recover for further analysis—choices complicated by the ocean’s roughly 3-mile depth.
The Bluefin can be programmed to conduct a specific search mission of about 20 hours, using side-scan sonar to pick out unique features on the ocean floor. If the data show an anomaly, the Bluefin would have its sonar equipment replaced with a high-grade underwater camera.
Mapping the location of any parts on the ocean floor is a crucial preliminary step to sending cameras down to document the scene. But searchers don’t want to take photographs too early, before they have a good sense of what’s there. The challenges of getting the timing right, said Claude Lelaie, a former senior safety official at European plane maker Airbus Group NV, “are a lot more complicated than people are suggesting, and it could easily take several years” to retrieve everything investigators would like to study.
Verification of any wreckage by the Bluefin would be a long way from snaring and bringing pieces to the surface, said John Purvis, a former head of accident investigations for Boeing. Salvage operations require different technologies with a dramatically different mission, Mr. Purvis said. “The hard part is really just starting.”
Previous searches, according to Mr. Purvis and other air-safety experts, underscore the importance of finding and analyzing debris at or near the surface of the water as a way to obtain important clues about how the aircraft went down.
For example, information about the likely angle of the jet’s nose as it entered the water could help searchers determine the location and size of the pieces they are likely to find on the bottom.
That is one reason why the multinational air and marine search for debris has continued across a much larger area despite several false leads on debris that turned out to be garbage.
“It’s important to avoid prematurely shutting down the aerial reconnaissance,” said Nick Stoss, retired head of aircraft investigations for the Transportation Safety Board of Canada.
The Malaysian plane veered sharply off course March 8, en route to Beijing from Kuala Lumpur, with 239 passengers and crew. The deployment of the Bluefin on Monday marked 38th day with no hard evidence of precisely where the jet ended up.
Authorities believe the plane crashed into the Indian Ocean far off the western coast of Australia after running out of fuel.
In the Indian Ocean, “currents can be wicked even at these depths,” said Mr. Purvis, making it imperative to get an accurate sonar depiction of wreckage before any retrieval operations begin. Once teams start trying to bring up pieces from depths greater than 1,000 feet, it quickly “moves from being expensive to being horrendously expensive,” Mr. Purvis said.
Further complicating the search is uncertainly about conditions on the seabed. Authorities expect to encounter a blanket of silt, which may be covering part or all of any plane debris.
“Each of these operations is going to be different, but if you take a look at Air France 447, [the black box] was just a couple of miles away and it took two years to find,” said U.S. Navy Capt. Mark Matthews, who is coordinating the underwater search from Perth.
“We’ve got more uncertainty in this case, and if we found it on Day One I’d be shocked.”
Posted by Unknown at 12:14 AM