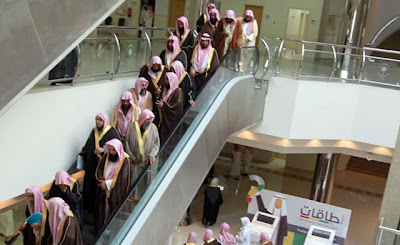 About 200 religious figures meeting at the labor ministry on Tuesday
asked Minister Adel Fakeih to ban women from working in lingerie shops.

A group of religious figures in Saudi Arabia have threatened to strike the labor minister who seeks to create jobs for women with “deadly prayers.” They threatened to pray that he gets cancer like his predecessor Ghazi al-Gosaibi, who died of the disease in 2010.

During a meeting at the labor ministry on Tuesday, about 200 religious figures accused Minister Adel Fakeih of executing a “Westernization” plan and asked him to ban women from working in lingerie shops within a month or he will face their dangerous prayers.

The ministry began in 2011 enforcing a decision to replace salesmen with Saudi women at lingerie shops in a bid to create jobs for women and meet the demands of female customers embarrassed to buy lingerie from salesman.

During the meeting, various religious figures successively attacked the minister and gave him little time to explain his decision and its benefit for the Saudi economy and for Saudi women.

One religious man told the minister, “I supplicated against a senior official at the ministry and he received the (cancer) disease and he died; this was because he began implementing the feminization decision,” according to al-Eqtisadiah newspaper. The man reportedly referred to previous Labor Minister Gosaibi.

Another religious figure told the minister that the government’s job is to employ women and not to decide where they should be employed.
Addressing the minister, another man said, “I am warning you, do not ignite sedition; we only came here to provide advice; your ministry has thrown our daughters in places that don’t suit their values.”

After a wave of attacks the minister finally snatched an opportunity to respond to the bearded men in front of him. He defended the decision to employ women, saying that women occupied jobs during the era of the Prophet Muhammad, adding that it made more sense if women rather than men are in charge of selling women’s lingerie.

The minister further told the congregation that they should take their case to court if they saw that his ministry is violating the law. - sumber
Posted by Unknown at 12:23 AM