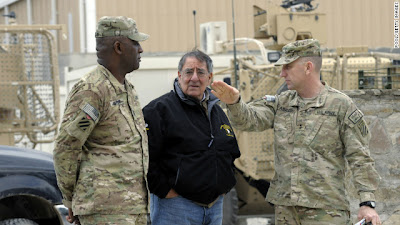 The attack struck an MRAP, the acronym for a Mine-Resistant Ambush Protected vehicle used by U.S. forces, as it was about to enter the base.

The Taliban claimed responsibility, the group's spokesman Qari Yousuf Ahmadi said in an e-mail CNN obtained. He wrote that a "brave Taliban fighter" carried out the attack. The e-mail did not specify whether the explosion was connected to Panetta's visit.

The defense secretary's delegation was never in danger, said a U.S. official traveling with Panetta.

The bomb went off about 5 p.m. local time and targeted "a foreign forces convoy."

"I don't know at this point if this was in any way linked to our visit," said the U.S. official traveling with Panetta.

Pentagon press secretary George Little confirmed that the explosion from was a vehicle-borne improvised explosive device, a term used for a car bomb.

Panetta made the comments after meeting with Karzai in Kabul, and a U.S. official released
a formal statement about that possible visit, which may come in January.

Karzai and Obama "look forward to discussing a shared vision of Afghanistan beyond 2014," the statement read.

The meeting will be an important opportunity to discuss implementation of the strategic partnership signed by the two leaders about U.S. military presence in the country, it explained.

"As we consider our post-2014 military and civilian presence, it is important that we work closely with President Karzai to understand his views about how we can best support his country while we pursue our core objectives and responsibly wind down the war," the statement said. "As (President Obama) has already made clear, any U.S. presence would only be at the invitation of the Afghan government and aimed at training Afghan Forces and targeting the remnants of al-Qaeda." - sumber
Posted by Unknown at 9:16 PM