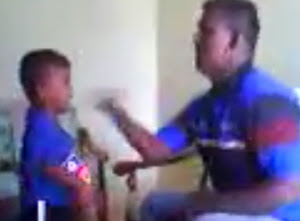 KLANG: A mechanic charged with abusing his three-year-old stepson, a video of which went viral on Facebook, has pleaded not guilty.
Chandra Segaran, 32, was charged under Section 31 (1) (a) of the Child Act 2001 at the Magistrate’s Court here.
If found guilty, he could face a prison term of up to 10 years, a fine of RM20,000 or both.
The mechanic appeared calm when the charge was read out. He had initially pleaded guilty but later changed his mind.
Magistrate Suhaimah Mohd Noor postponed the case to Jan 15 and denied bail.
The toddler, who was abused, was also present in court together with his mother, who is Chandra’s second wife.
Posted by Unknown at 1:50 PM