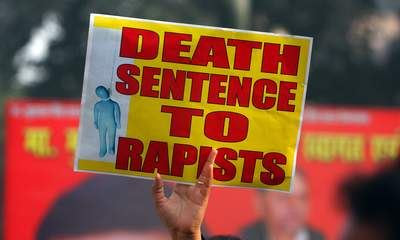 A 17-year-old Indian girl who was allegedly gang-raped killed herself after police pressured her to drop the case and marry one of her attackers, police and a relative said on Thursday.

It comes as the 23-year-old Indian medical student who was gang-raped on a bus in New Delhi arrived at Singapore's Mount Elizabeth Hospital for further treatment.
A hospital spokesperson said the patient is in an "extremely critical condition" after the attack on December 16.
She was transferred overseas for better treatment.
The latest case, in the Patiala region in the Punjab, has again shone the spotlight on the police's handling of sex crimes.
One police officer has been sacked and another suspended over their conduct after the assault during the festival of Diwali on November 13, according to officials.
The teenager was found dead on Wednesday night after swallowing poison.
Her death came as it emerged that the names, addresses and photographs of convicted rapists will be posted online by police in India to publicly shame them for their crimes.
Inspector General Paramjit Singh Gill said that the teenager had been "running from pillar to post to get her case registered" but officers failed to open a formal inquiry.
"One of the officers tried to convince her to withdraw the case," Gill, the police chief for the area, told AFP.
Before her death, there had been no arrests, although three people were detained on Thursday. Two of them were her alleged male attackers and the third was a suspected woman accomplice.
The victim's sister told Indian television that the teenager had been urged to either accept cash or marry one of her attackers.
"The police started pressuring her to either reach a financial settlement with her attackers or marry one of them," her sister told the NDTV network.
Meanwhile, the Press Trust of India reported that a police officer has been suspended for allegedly refusing to register a rape complaint in the northern state of Chhattisgar.
The woman and her husband later brought the case to the attention of a more senior officer and a hunt has now been launched for her attacker, an auto rickshaw driver.
Official figures show that 228,650 of the total 256,329 violent crimes recorded last year in India were against women.
The real figure is thought to be much higher as so many women are reluctant to report attacks to the police.
During an address to the chief ministers of India's states on Thursday, Prime Minister Manmohan Singh pledged to bring in new laws to cover attacks on women. - sumber
Posted by Unknown at 1:20 AM