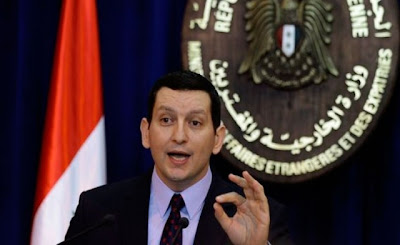 Early December, diplomatic sources said Jihad Makdissi had defected and left to Beirut on his way to London.


Syria’s defected Foreign Ministry spokesman Jihad Makdissi is reportedly in the United States and is co-operating with the Americans, according to the Guardian on Monday.

The report, which notes that the information about his whereabouts has now been “confirmed,” says U.S. intelligence officials helped him flee to Washington after he first crossed into Lebanon almost one month ago.

“Details of Makdissi's journey to the U.S. are not yet known, although Britain has previously denied that he arrived in the UK after fleeing Beirut,” the Guardian report read.

Recently, Makdissi’s whereabouts were shrouded in mystery amid new reports suggesting the man might have been kidnapped by the Lebanese’s Hezbollah group and handed over to the Syrian regime.

The latest reports on Makdissi’s fate established links to Damascus’s latest statements on the matter claiming that he was rather on a “three-month sabbatical.”

Four days after his disappearance in Beirut, Hezbollah's television station Al-Manar announced on Dec. 3 that Makdissi had been sacked for making statements which didn’t reflect official government positions.

Makdissi reportedly angered Damascus when he said in a press conference that the Syrian regime will never use chemical weapons against civilians and that would only in case of foreign intervention. Makdissi’s admission that Damascus possessed the WMDs angered Damascus.

Early December, diplomatic sources said Makdissi had defected and left to Beirut on his way to London.

But on Dec. 4, British officials told The Guardian that Makdissi did not arrive to London. Later reports surfaced that he was headed for the United States, but those reports were soon dismissed by Washington.

“We believe Jihad Makdissi is in London, we cannot confirm. Not aware of him reaching out to U.S. embassy,” State Department spokesman, Mark Toner, told al-Hayat newspaper.

According to Reuters, Makdissi, who belongs to Syria’s Christian minority, staunchly defended Assad’s crackdown on the 20-month revolt against five decades of autocratic rule by Assad and his late father.

He often spoke at news conferences in Damascus to set out Syria's response to the uprising against President Bashar al-Assad but was rarely seen in the media before Dec. 3 , raising speculation that he may have defected.

A former diplomat, Makdissi is fluent in English, a rarity in the state apparatus shaped by xenophobic Baath Party ideology. But he had little influence in a system underpinned by the security apparatus in which the foreign ministry has no say.

Asaad Mustafa, a former agriculture minister, told Al Arabiya that Makdissi was expected to defect because “the scale of falsified information he was asked to report was unbearable.”

Mustafa added that all current Syrian diplomats are looking for “means for salvation” and that anyone who could find an opportunity to snatch does not miss it.

Opposition sources also said that the Syrian regime had burned the house of Makdissi in the high-security area of Mezzah in Damascus. The Torching of Makdissi’s home is an indication of Syrian regime anger toward the official who might have defected.

Sources also said that Makdissi was planning to escape Syria since October but he was afraid that the regime can take its vengeance against him through his relatives. However, since his family moved to Beirut in the past couple of months, Makdissi started visiting the Lebanese capital almost weekly.

Other sources said that Makdissi didn’t have any entry visas to both Britain and the United States as they were canceled after becoming Syria’s Foreign Ministry’s spokesman few months after the eruption of the uprising against Assad regime on March 2011.
Posted by Unknown at 9:12 PM