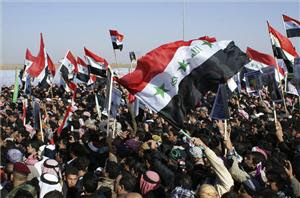 Tens of thousands of Iraqis have taken part in protests along a major western highway and in other parts of the country in fresh rallies against the government of Prime Minister Nouri al-Maliki.

Massive demonstrations took place along a major highway near the city of Fallujah on Friday, declaring the day a "Friday of honor."

The rallies appear to be the largest yet in a week of demonstrations, intensifying pressure on the Shia-led government.

In the northern city of Mosul, around 3,000 demonstrators took to the streets to denounce what they called the sidelining of Sunnis in Iraq and to demand the release of Sunni prisoners.

As in protests earlier in the week, demonstrators there chanted the Arab Spring slogan: "The people want the downfall of the regime."

Thousands likewise took to the streets in the northern Sunni towns of Tikrit and Samarra, where they were joined by legislators and provincial officials, said Salahuddin provincial spokesman Mohammed al-Asi.

Protests erupted last week after Iraqi authorities detained 10 bodyguards of the finance minister, who is from Anbar and is one of the government's most senior Sunni officials.

Many Sunnis accuse al-Maliki of marginalising the country's religious minority group by refusing to share power and depriving them of equal rights.

The main highway at Ramadi, 100km west of Baghdad, was barricaded for a fifth day, disrupting transit of
government supplies along a key trade route to and from Jordan and Syria.

Protesters were, however, letting most trucks, carrying private goods, pass along another road through Ramadi.

At a conference in Baghdad, al-Maliki warned against a return to sectarian conflict and cautioned that the country is close to returning to the "dark days when people were killed because of their names or identities."
He also used the occasion to take a jab at the protesters in Anbar.

"Nations that look for peace, love and reconstruction must choose civilized ways to express themselves. It is not acceptable to express opinions by blocking the roads, encouraging sectarianism, threating to launch wars and dividing Iraq," he said.

"Instead we need to talk, to listen to each other and to agree ... to end our differences."

Activists want changes to laws on terrorism that they say penalise Sunnis.

While demands so far focus on the anti-terrorism laws which Sunnis say are being used against them, one lecturer in law at Baghdad University said Sunnis might be emboldened to call for regional autonomy in Anbar and other provinces in the northwest where they are in a majority - a status similar to that of the Kurds, who won Western-backed autonomy from Saddam in 1991.

"I'm seeing greater determination to defy Maliki and if their demands are not met, the call to have their own region will be an inevitable consequence," said Ahmed Younis.

"The Kurdish region could become a model for Sunnis in Anbar." - sumber
Posted by Unknown at 12:25 AM