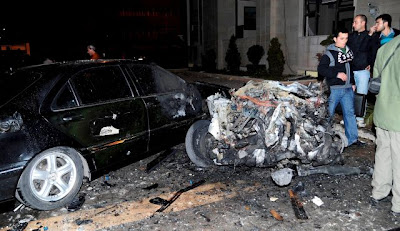 In the first acknowledgement by Assad's main ally that he faces a likely defeat, Russia's deputy foreign minister said Thursday that President Bashar Assad is losing control over Syria and that his opponents may win, as Lebanese media reported that 16 people were killed and more than 25 wounded in a car bomb near Damascus.
While Mikhail Bogdanov didn't issue any immediate signal that Russia could change its stance and come to support international sanctions against Assad's regime, his remarks carried by Russian news agencies appear to indicate that Moscow has begun positioning itself for a regime change in Syria.
"We must look at the facts: there is a trend for the government to progressively lose control over an increasing part of the territory," Bogdanov said during hearings at the Kremlin advisory body, the Public Chamber. "The opposition victory can't be excluded."
At the same time, he repeated Russia's call for a compromise, saying it would take the opposition a long time to defeat the regime and the country would suffer heavy casualties.
"The fighting will become even more intense, and you will lose tens of thousands and, perhaps, hundreds of thousands of people," he said. "If such a price for the ouster of the president seems acceptable to you, what can we do? We, of course, consider it absolutely unacceptable."
Sixteen people were killed and more than 25 wounded, including women and children, in a car bomb in Qatana, a town 15 miles southwest of Damascus, Lebanon's al-Manar television channel reported on Thursday.
Qatana is part of a string of outlying suburbs and towns where President Bashar Assad's forces have been trying to push back rebels. The attack follows three bombs which exploded at the Interior Ministry on Wednesday evening, killing five.
On Wednesday, U.S. House Intelligence Committee Chairman Mike Rogers said Syria's chemical weapons could be used at "a moment's notice" and the international community should not accept any assurances from Syrian officials that they will not be used.
U.S. and other Western officials recently issued sharp warnings to Syrian President Bashar Assad not to deploy chemical weapons. Syria called those warnings a "pretext for intervention" in the civil war.
Russia has joined with China at the United Nations Security Council to veto three draft resolutions that would impose sanctions on Assad's regime over its bloody crackdown on the uprising that began in March 2011. Moscow also has continued to provide the Syrian government with weapons despite strong international protests. - sumber
Posted by Unknown at 9:05 PM