A colossal squid discovered in Antarctica could hold vital clues about the legend of the 'kraken' sea monster.
Found frozen a mile below the surface of the Ross Sea, the giant creature weighed in at 350kg and had to be lifted using a forklift truck.
It is now being defrosted so that scientists can conduct research, which could confirm or dispel the myth of the terrifying creature from fishermen's tales.

Measuring the length of a minibus, the squid has eight tentacles which are each over a metre in length, and would have been double that if they had not been damaged.

The female squid, which had been beneath the sea's surface for eight months, was captured by Captain John Bennett - who caught another colossal squid seven years ago, which is now on display in New Zealand's national museum. 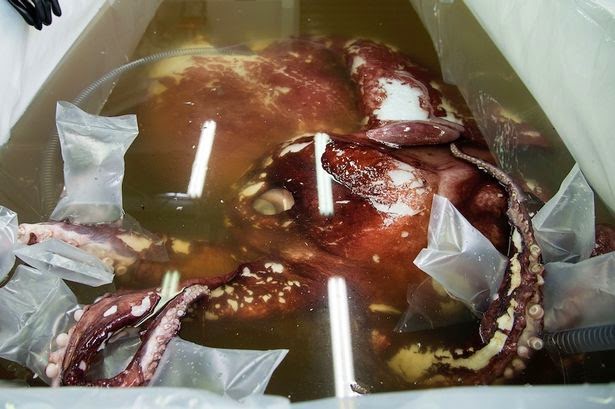 Giant: The squid measured the length of a minibus and weighed in at 350kg

Captain and crew agreed the squid should be given to scientists for them to defrost it and conduct further research into the elusive specimen.

"It was partly alive, it was still hanging onto the fish," said Mr Bennett.

"Just a big bulk in the water. They're huge and the mantles all filled with water. It's quite an awesome sight."
Rarely seen in the flesh, the huge creatures are usually stuff of legend, or old stories told by fisherman. 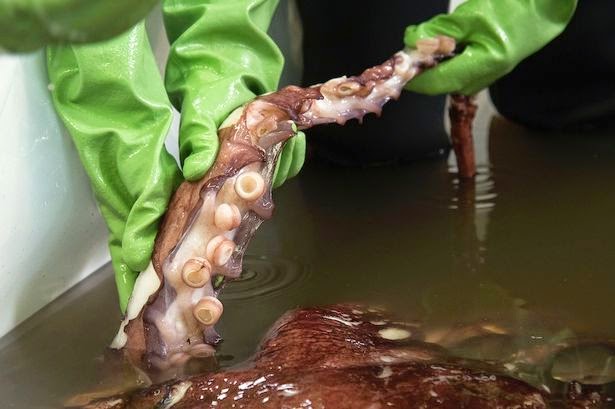 Quite a reach: The squid's tentacles were over a metre in length

But now scientists can get up close to the rare animal they hope to find out much more about the the species, including where it fits into the food chain and basic facts about how it lives and dies.
Kat Bolstad, a squid scientist from the Auckland University of Technology who is leading the creature's examination, said: "This is essentially an intact specimen, which is almost an unparallelled opportunity for us to examine."
"This is a spectacular opportunity," she added.
Scientists are to fully assess the condition of the creature before deciding whether it should be preserved for public display. 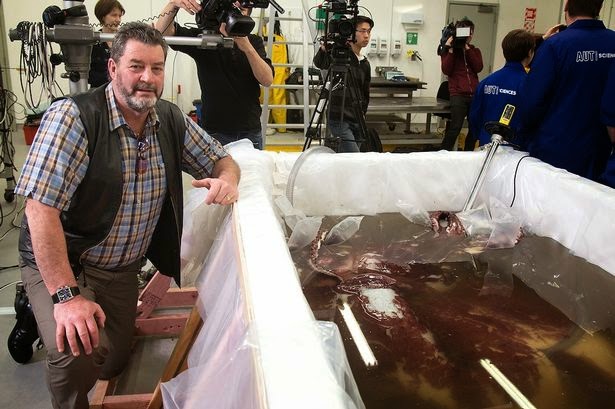 Aye aye Captain: John Bennett and his crew caught the squid out at sea

Dr Bolstad thinks the colossal animal could have given rise to the seafaring tales of the legendary kraken monster.
Sightings of the squid wrestling with its predators, including sperm whales which are known to eat the species, could have been mistaken for the epic battles depicted in the old sailors' tales.
"On the other hand, we don't really know what the grog rations were like at that time at sea, either," she joked.
"So it may be that we've got a bit of a fisherman's story going on there, too."
Posted by Unknown at 8:40 PM