'All of a sudden I heard this almighty bang'

That's not meant to be in the front room! Car racing at 80mph ploughs into house

It's not something you expect to wake up to - a car lodged right through the front door of your home.

But this was the sight that greeted the neighbours after a blue Vauxhall Astra smashed into a detached house.

The car, which was seen racing at alleged speeds of 80-100mph, ploughed through the front fence after losing control at the nearby roundabout. 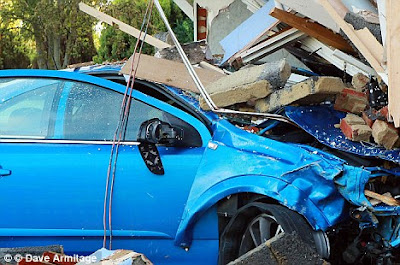 Crash scene: The racing Astra ended up lodged in the front of the house in Aylesbury after losing control
It ricocheted into the front door destroying a downstairs toilet. Debris was scattered all over the garden with skid marks across the lawn.

Miriam and Ormund Robin, who live in the detached house, have been shocked by the incident.

'All of a sudden I heard this almighty bang,' said Mrs Robin.
'I went out to see what had caused the noise and I was absolutely shocked when I saw the car.

'I was shaking and I didn't know if the house was going to go up in flames.

'If I had been in the downstairs loo I would have been dead. It's been demolished.' 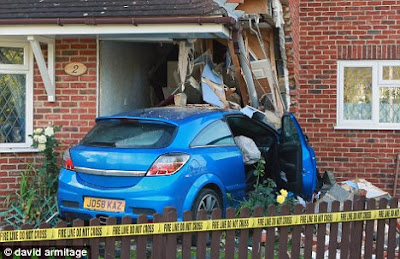 Smash: The two teenagers believed to be responsible are now in police custody

A spokesman for Thames Valley Police said two people from the vehicle had been arrested in connection with the incident.

Mrs Robin said she had had a lucky escape. 'If I had been in the downstairs loo I would have been dead,' she told the Bucks Herald. 'It's been demolished.'

The crash at Oliffe Way, Aylesbury, Buckinghamshire, happened about 11pm on Saturday night.

An eyewitness said: 'The whole front end of the house is completely wiped out.'

It is understood the two people in the car – believed to be teenagers – escaped serious injury and nobody else was hurt in the crash. 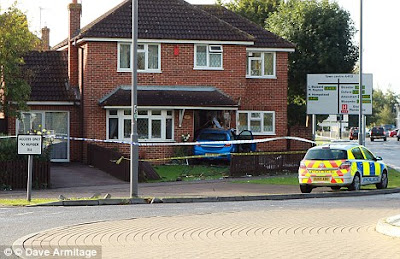 Cordoned off: The detached house next to the roundabout which the car hit before slamming into the home

The incident comes only days after another resident of the street had his car damaged by a vehicle slamming into it.

Dudley Joseph, 49, launched a campaign to redesign the local roundabout after his brand-new car was hit by an out-of-control driver.

The car is still lodged in the house and it is understood that the authorities are awaiting a structural engineer to inspect the property before the vehicle is removed.

The couple's son-in-law told the Bucks Herald that their insurance company had refused to respond to the incident until Monday.

Read more: dailymail.co.uk
Posted by Unknown at 1:36 AM