This is the dramatic moment a boat full of tourists narrowly escaped an extremely cold dip as they toured round glacier-filled waters.

Panicked tourists watched as a huge chunk of ice broke off a glacier and crashed into the water just yards from their boat at the Tracy Arm-Fords Terror Wilderness, Alaska.

Flying chips of ice can be seen splashing into the water and the boat begins to violently rock as it pulls rapidly away from the collapsing glacier. 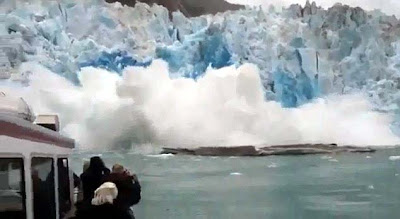 Time to go: Tourists move to the stern of the boat after a massive chunk of glacier broke off in Tracy Arm-Fords Terror Wilderness, Alaska 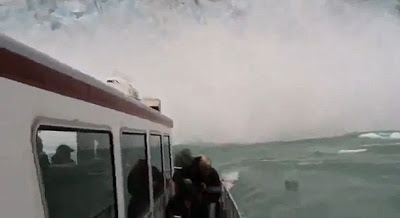 Panic: A female passenger suffered a broken leg after the boat was forced to back up rapidly to escape falling ice and rock
One female passenger on board the vessel is believed to have broken her leg after being thrown to the deck.

But the boat managed to escape further damage thanks to the quick action of its captain.

Approaching the glaciers can be extremely dangerous as they are prone to collapsing when ice melts.

The 653,000-acre wilderness, which borders Canada, has two sheer-walled fjords over 30 miles long which feature tidewater glaciers calving into the sea.

It is home to black and brown bears, wolves, deer and harbor seals.

The area, in the Gulf of Alaska, is a popular destination for tourists, with tours departing from nearby Juneau. 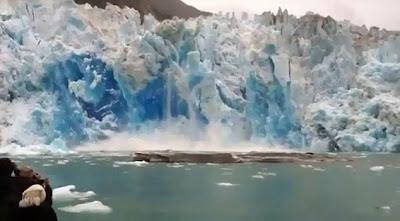 Danger: The chunk of ice caused the boat to roll alarmingly in the freezing cold water of the Gulf of Alaska 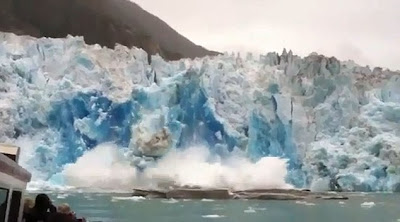 Lucky escape: Collapsing glaciers make tours of the freezing fjords of Alaska a dangerous pursuit
Cerita dari sini
Posted by Unknown at 2:05 AM