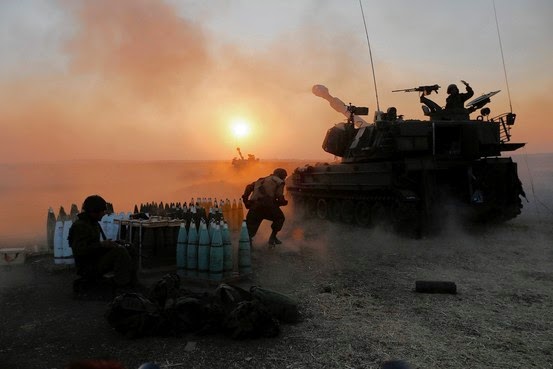 The U.S. turned to pushing for an immediate cease-fire in Gaza with the death toll nearing 600, as Israeli officials indicated they would keep up efforts to destroy tunnels that Hamas is increasingly using to mount cross-border attacks.
The death toll in Gaza rose to 571 on Monday, the Palestinian Health Ministry said. It is up more than 300 in the four days since Israel's ground invasion began. More than 149 children are among the dead, the officials said.

Nine more Israeli soldiers were killed on Monday, four of them in a raid by Hamas militants who infiltrated southern Israel through a tunnel. There have been five such raids in five days. Twenty-five soldiers and two civilians have been killed, 20 of the soldiers in the past two days. That is more than double the combined total of 10 soldiers killed for Israel's last two conflicts with Hamas in 2012 and 2008-9.
"We don't want to see any more civilians getting killed," President Barack Obama said after he dispatched his top diplomat, Secretary of State John Kerry, to Cairo for open-ended negotiations on a cease-fire. "I have instructed him to push for an immediate cessation of hostilities based on a return to the November 2012 cease-fire agreement between Israel and Hamas in Gaza." It was Mr. Obama's most forceful call to immediately end the fighting.
Mr. Kerry said the U.S. was deeply concerned about the consequences of Israel's "appropriate and legitimate" effort to defend itself.
"No country can stand by when rockets are attacking it and tunnels are dug in order to come into your country and assault your people," he said. "But always, in any kind of conflict, there is a concern about civilians—about children, women, communities that are caught in it."
View Slideshow 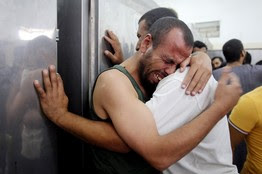 Palestinians mourn the death of relatives at a hospital morgue in the southern Gaza Strip on Monday.Reuters
On Sunday, Mr. Kerry was inadvertently recorded talking to an aide and appeared to mock Israel's claims of "pinpoint" accuracy in its military operations in Gaza.
Since launching a ground invasion on Thursday, Israel has found the tunnel network is far more extensive than previously thought.
Defense Minister Moshe Ya'alon said Sunday that Israel expected to complete its operation against the tunnels within several days. That was seen as a signal that Prime Minister Benjamin Netanyahu's government doesn't have an appetite for a prolonged offensive.
Mike Herzog, a former Israeli negotiator familiar with government thinking, said Israel wants to finish the tunnel operation, which will take a few more days, and only then will consider a cease-fire.
If Israel's security requirements for a cease-fire aren't met and it perceives that the deal would give Hamas a political achievement, the government will oppose the truce "no matter who is calling for it," he added.
A senior American administration official said the U.S. believes Israel is generally on board with a cease-fire because Mr. Netanyahu indicated as much in his conversations with Mr. Obama and Mr. Kerry, and Israel supported an Egypt cease-fire proposal last week. Israel will back a new proposal, the U.S. believes, if leaders feel there is a diplomatic solution that addresses their concerns about ending Hamas rocket fire.
The intensified offensive hasn't stopped rockets from Gaza. Israel said militants launched 130 into its territory on Monday and 14 were intercepted over populated areas, including two over Tel Aviv.
In addition to the four soldiers who died in the tunnel raid, the military said five more soldiers were killed on Monday. Dozens of Palestinians died during a day of heavy fighting in Gaza's densely populated cities and along its northern border, the Palestinian Health Ministry said. Five Palestinians were killed at a hospital in Deir el-Balah hit by Israeli tank fire. An Israeli airstrike in Khan Younis killed 28 people in a home that was flattened.
While Israeli forces have found and destroyed 16 tunnels and 45 entrances since Thursday, a senior military official said the recent ground operations revealed there were many more. The Gaza Strip, a densely populated sliver of land 25 miles long and roughly 7 miles wide with nearly two million people, is sitting on top of a vast infrastructure used to move rockets, weapons and people, the official told reporters in a briefing.
"It's very complicated to find which entrance belongs to which tunnel," the official said, adding that the military had learned the network was "much more sophisticated than we suspected."
Israel has extensive surveillance capabilities in Gaza, including drones that give a live, close-up picture of the area. But tunnel construction is difficult to detect because entrances are typically built within enclosed structures such as houses or warehouses. Some are even sealed with cement or tile for later use, further complicating detection efforts, said Michael Oren, a military historian and former Israeli ambassador to the U.S.
Given the difficulty in detecting tunnels, even if Israel succeeds in its mission, wiping out the network entirely is probably not feasible, the military official said. Without a political agreement that allows for inspections by Israel, there is nothing that would prevent Hamas from rebuilding other than the high cost.
Hamas's predawn incursions on Monday highlighted Israel's vulnerability to surprise attack.
At Kibbutz Nir Am near the Gaza border, the agrarian scene offered no sign of the construction project that had been taking place below. Over 14 years, the border farming collective has become accustomed to frequent barrages of rockets. But residents believed the ground near the kibbutz was made up of sandstone and too unstable to build a tunnel.
Two teams of Hamas fighters emerged from different openings, one headed to Nir Am and another to a neighboring kibbutz. The army said it repelled both teams, and residents at Nir Am said the fighting lasted several hours. Hamas said it destroyed an Israeli armored vehicle with an antitank missile. The army said four of its soldiers and 10 of the militants died in the clash.

"This is a new threat," said Betty Gavri, a member of Nir Am's emergency response team. "We knew it existed in theory, but until you experience it, you don't really know."
Hamas has highlighted the sophistication of its tunnels on social media and elsewhere as a point of pride, and has responded defiantly to Israel's pledge to eradicate them. Asked what it would do if Israel destroyed all of them, a Hamas spokesman said last week that they would be rebuilt.
Tunnel-building expertise came to Gaza in the 1990s from Hezbollah, which had developed tunnels as a tactic to evade Israeli airstrikes. The extent and sophistication of the underground passages has grown steadily since then, overseen by an elite Hamas unit that digs them.
Some are used to infiltrate Israel, others to smuggle goods and people to and from Gaza across the Egyptian border and some are large enough to transport cars. Egypt, which like Israel is at odds with Hamas, said in March that it destroyed 1,370 of the smuggling tunnels. 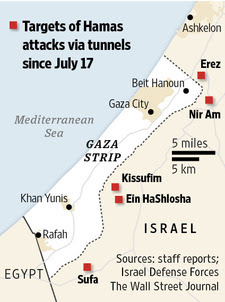 "It started with crawling, but through the years it advanced," said Doron Peskin, head of research at the Tel Aviv-based consultancy Info-Prod. "We are now speaking about tunnels in which an average person can stand and a fighter can carry his equipment and weapons. Also one of the purposes of course was to take an Israeli as a hostage."
Hamas secured the release of more than 1,000 prisoners in 2011 in exchange for soldier Gilad Shalit, who was captured in a raid through a cross-border tunnel in 2006.
Gaza's tunnels are supported by concrete and steel walls and sometimes include communication lines, electricity and lighting—an expensive amenity in Gaza where energy is in short supply and blackouts hit daily. The average depth of the tunnels being uncovered is 82 feet, according to the army.
An Israeli commander quoted in the newspaper Yedioth Ahronoth said the forces had discovered a large tunnel built to a high structural standard.
"It was 27 meters (88 feet) deep, which is more than seven stories," the commander said. "Based on the list of quantities of the previous tunnel we exposed,…this tunnel had at least 8,000 tons of concrete. You could build a high-rise with that."
As the fighting rages, the Obama administration has come under growing pressure from European and Arab allies to stanch the rising civilian death toll in Gaza.
Senior U.S. officials traveling with Mr. Kerry said the politics of the Middle East have shifted dramatically since the Obama administration intervened in 2012 to end the last round of fighting between Israel and Hamas. The officials said leading Arab states are deeply divided over whether to bail Hamas out and that Egypt's new president, Abdel Fattah Al Sisi, had only limited sway over the Palestinian fighters.
Relations between Mr. Kerry and Israel's government have noticeably cooled since the collapse in April of formal peace talks between Israel and the Palestinians.