Israeli media describes killing of officer as a 'decisive blow' 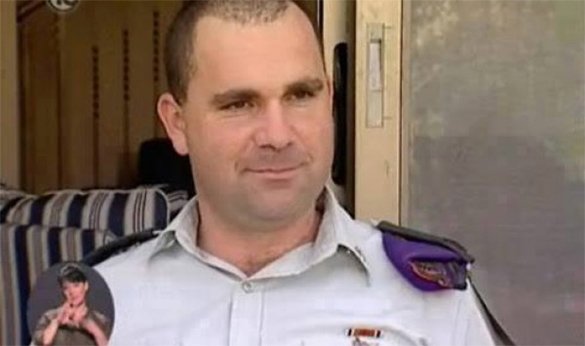 Lt. Colonel Dolev Kedar [image from Israel's Channel 10 broadcast
The Israeli media revealed that an army lieutenant was killed yesterday along with three soldiers in an ambush laid by the Izz Ad-Din Al-Qassam Brigades fighters near the Naraam settlement in the northern Gaza Strip, Al-Mesryoon news website reported.
The Al-Quds news website quoted Israel's Channel 10 as saying: "Lt. Colonel Dolev Kedar, Commander of Geffen Battalion is the highest ranking officer to be killed since the start of the Israeli aggression against the Gaza Strip by the Palestinian resistance and that his death represents a decisive blow to the Israeli army."
The Brigades, the military wing of the Palestinian Islamic Resistance Movement Hamas, said that a special unit had used a tunnel to infiltrate the Israeli territory near the Naraam settlement wearing Israeli army uniforms and lured a group of Israeli soldiers, including Kedar, clashing with them and killing them all.
According to an investigation conducted by the Israeli army and published by Channel Ten, the army discovered the unit but did not attack it thinking it was an Israeli force.
The Brigades said in a statement that "an elite combat unit consisting of twelve members has infiltrated into the Israeli territory and carried out an attack east of Beit Hanoun in the northern Gaza Strip, inflicting heavy losses to the Israeli army."
According to the statement, the unit which was divided into two groups ambushed the Israeli patrol unit which consisted of two army jeeps, attacking the first jeep with RPG shell burning it and killing the soldiers on board. The statement pointed out that one of the two groups withdrew from the site but was bombed by an Israeli helicopter while the second one was engaged in violent clash with an Israeli special unit that arrived at the scene.
The Qassam Brigades confirmed that 10 fighters were lost in the operation, while two more returned to their bases safely, however the Israeli army said that only nine fighters were killed in the incident - sumber
Posted by Unknown at 6:12 AM