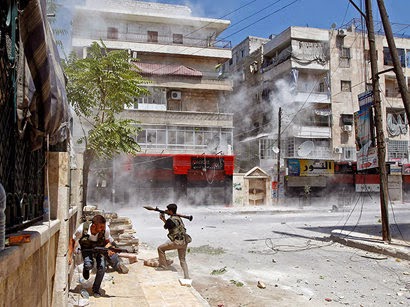 At least 85 Syrian army troops were killed as the jihadist Islamic State advanced on a regime position in the northern province of Raqa, a monitoring group said Saturday, AFP reported.
The Syrian Observatory for Human Rights said the fate of around 200 other soldiers remained unknown, as the IS assault forced the army to pull back late on Friday.
The Division 17 base has fallen from army control but "the jihadists have not moved into the site for fear of air strikes", said the Britain-based group's director, Rami Abdel Rahman.
The IS lost at least 28 jihadist fighters, he said.
The Observatory said more than 50 troops were summarily executed, 19 more were killed in a double suicide attack and at least 16 others had died in the IS assault launched early Thursday.
"Hundreds of troops surviving withdrew on Friday to safe places -- either to nearby villages whose residents oppose IS or to nearby Brigade 93 -- but the fate of some 200 remains unknown," said Abdel Rahman.
"Some of the executed troops were beheaded, and their bodies and severed heads put on display in Raqa city," stronghold of the feared IS, he said.
The assault on Division 17 comes less than two weeks after IS killed 270 security guards, employees and members of the paramilitary National Defense Forces during a jihadist assault on a gas field in Homs, central Syria.
On Friday, the U.N. Commission of Inquiry on Syria said IS fighters accused of atrocities are expected to be added to a U.N. list of possible war crime indictees
Posted by Unknown at 9:31 AM