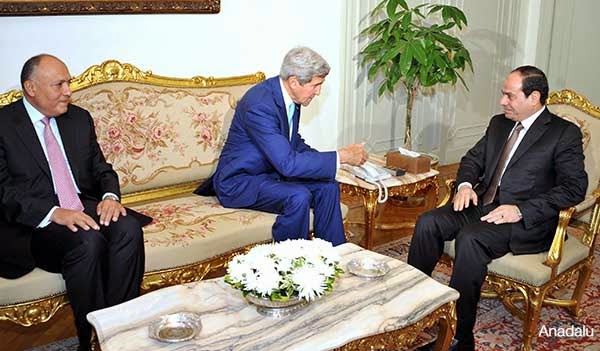 Many readers and viewers of the Egyptian media seem perplexed by its coverage of the Israeli aggression on Gaza Strip especially as it praises its aerial raids against innocent civilians and describe it as a "war on terrorism".

The strangest incident occurred when Israel's Channel Two praised an Egyptian TV host who called on the Egyptian Army to explicitly help the Israeli army to eliminate Hamas for supporting ousted President Mohamed Morsi and the Muslim Brotherhood.
The host and her channel's position reflect the incitement campaign waged by the major Egyptian newspapers and TV channels against Hamas, calling it an "internal occupier, not less dangerous than a foreign occupier".
A group of Egyptian journalists and writers gloated over targeting Hamas and condemned its reaction to the Israeli aggression by firing missiles at Israeli cities, claiming it was "an attempt to embarrass Egypt and President Abdel Fatah Al-Sisi".
CBC TV station described the Israeli targets in Gaza as terrorist targets.
Imad Eddin Adeed Adib, who is known for his close ties with the regime, said, in an article published in Al-Watan newspaper, that "the last thing Egypt needs now is to drag its armed forces into military operations outside its borders", stressing that the Egyptian media "does not target the Palestinian resistance, but refuses Hamas' random actions."
Adib said: "Hamas would be delusional to believe that Egypt would play the same role played by President Morsi during the aggression in 2012; because the great relationship between Hamas and the Muslim Brotherhood no longer exists, and Hamas does not deserve the Egyptian support after all the crimes it committed by killing rebels in Tahrir Square and storming prisons.
"We should not leave the Palestinian people in Gaza victims of the Israeli aggression and prey to the aggressive policies of Hamas towards its neighbours."
A member of the Journalists Against the Coup Mujahid Melegi criticised the Egyptian media's incitement against Hamas and the Gaza Strip saying "it will lead to inciting the Egyptian public opinion against the Palestinians and brings more atrocities to the Gaza Strip."
Melegi described those who incite against the Palestinian resistance in the Egyptian and Arab media as "traitors who destroy the Arab conscience and side with the occupation against their brothers in religion and language".
He pointed out that "the Egyptian regime is a key partner in the aggression on Gaza, especially as Israel considers Al-Sisi its national hero. Therefore the pro-regime media distorts the image of the resistance and reduces its military capabilities to undermine Al-Sisi's betrayal."
Head of the Electronic Media Union, Abubakar Khallaf said: "The Egyptian leaders try to justify their failures by using the media as a tool which blames Hamas and justifies closing the Rafah crossing and the Israeli attack as a reaction to Hamas' foolish actions.
"Since the coup against President Morsi, the media links the Muslim Brotherhood to Hamas and terrorism; and therefore Egypt cannot show the world that it defends Hamas, while it accuses it of terrorism."
Khallaf reminded those journalists of their duty to professionalism, and the press charter, and that his union measures media performance, although it realises that all of these moves will not work in light of the insistence by some to mislead the public and manipulate their minds for funds.
Posted by Unknown at 5:41 AM