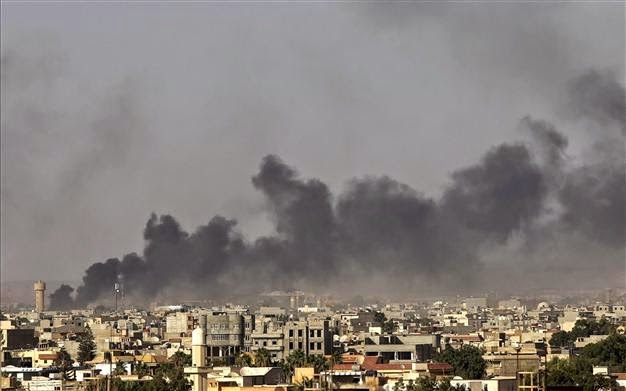 Black plumes of smoke is seen in the vicinity of Camp Thunderbolt, after clashes between militants, former rebel fighters and government forces in Benghazi July 26, 2014. REUTERS Photo

No room for Christians in Iraq anymore, fleeing residents say

At least 38 people, mostly soldiers, were killed in 24 hours of fierce fighting between the Libyan army and Islamists in the eastern city of Benghazi, officials said on July 27.       A military source said the clashes broke out on Saturday when Islamist groups launched an assault on the headquarters of a special forces unit near the city centre, causing casualties among forces defending their barracks.       Benghazi's main hospital said the bodies of 28 soldiers had been taken there in the past 24 hours, along with 50 injured, while Al-Marj hospital, 100 kilometres (60 miles) to the east, spoke of two soldiers dead and 10 injured.       A spokesman for the self-proclaimed Shura Council of Benghazi Revolutionaries, an alliance of Islamic and jihadist militia who have claimed a number of attacks on military bases in the area, announced that eight of its fighters had died.       Overnight, special forces commander Wanis Abu Khamada told Libya Al-Ahrar television that his troops "still have the capacity to repel any attack on state institutions".       An AFP correspondent reported that several families could be seen leaving the area of the clashes, as loud explosions were heard in the city on Sunday morning.       Near-daily clashes take place in Benghazi, where parts of the Mediterranean city have become strongholds for Islamist groups since the 2011 revolution that ousted longtime dictator Moamer Kadhafi.       The latest bloodshed came a day after the US evacuated its embassy in Tripoli due to fears for the safety of staff and as Britain joined the Americans in advising its citizens against travel to strife-torn Libya.       London urged all those Britons currently in the country to leave, although its embassy in Tripoli remains open.       "Due to the ongoing and greater intensity of fighting in Tripoli and wider instability throughout Libya, the Foreign and Commonwealth Office (FCO) advise against all travel to Libya," the ministry's website said.         "British nationals in Libya should leave now by commercial means."        The United States evacuated its Libyan embassy staff under air cover Saturday as they faced a "real risk" from fierce fighting around Tripoli airport, Secretary of State John Kerry said.       The airport has been closed since July 13 because of deadly clashes between armed groups in the area.       The US announcement that it was evacuating its embassy came hours after the country's interim government warned that the clashes between militia vying for control of the strategic airport were threatening to tear Libya apart.
Posted by Unknown at 2:59 AM