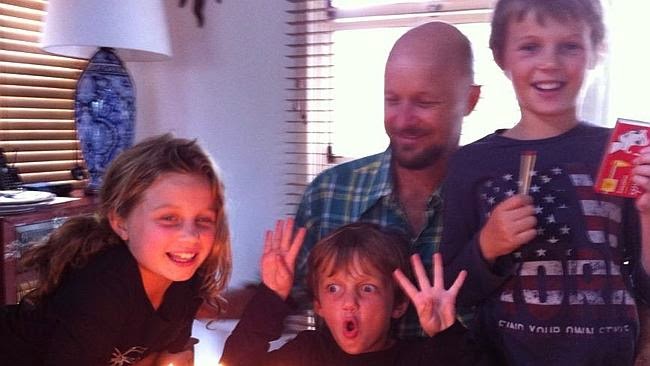 Evie Norris (left) and Otis Norris (center, low) with their brother Mo Norris (right) and father Anthony Maslin (center, back). Anthony remained in Europe and did not accompany them on the flight. Picture: Facebook


THE world was their playground; three adventurous spirits who toured the globe.
From Dubrovnik to Penang, Mo, Evie and Otis Maslin crammed a lifetime of travel into their tender years, bouncing from one exciting holiday to the next.
But the Perth siblings would never return from their latest European escapade; their blissful little lives stripped away by evil.
After spending a few weeks on a family holiday in Europe the trio waved goodbye to their parents Rin Norris and Anthony Maslin in Amsterdam and boarded a plane with their grandad Nick Norris, who was returning from a stint working in London.
BEFORE TAKEOFF: Inside MH17
MORE: World’s top researchers perish
Leaving mum and dad for a few more days in Europe holiday, the kids (Mo 12, Evie 10, Otis 8) had to get back to school.
The family’s quadruple loss counts as the cruellest of blows to any family grieving loved ones who were on MH17.
Ms Norris’ brother Brack Norris was stunned and disbelieving when he heard the news.


``They were the most incredible kids, well beyond their years in many aspects. We will miss them all so terribly,’’ he said.
``It just seems surreal. We are not all losing it, but I think it’s slowly sinking in.’’
Through tears, he praised his dad as a model father and keen sailor.
``He was a fantastic man," he said.
Brack and Rin’s sister Natalia Gemmell, said paid tribute to her nephews and neice.
“[They were] just gentle, clever, beautiful kids.”
She also revealed she managed to tell him she loved him just before he left for Amsterdam.
“In my mind he was a very great man; he has been a Lieutenant Colonel in the Army Reserves; he’s been a headmaster; he’s been a consultant with Indigenous people with education and he has done his bit to change his part of the world.”
“I spoke to him just before he caught the plane to find out when he was leaving and told him I loved him and told him I’d see him when he got back.”
Mr Norris was married to Lindy Norris and was managing director of change management group, Collaborative Systemic Change. 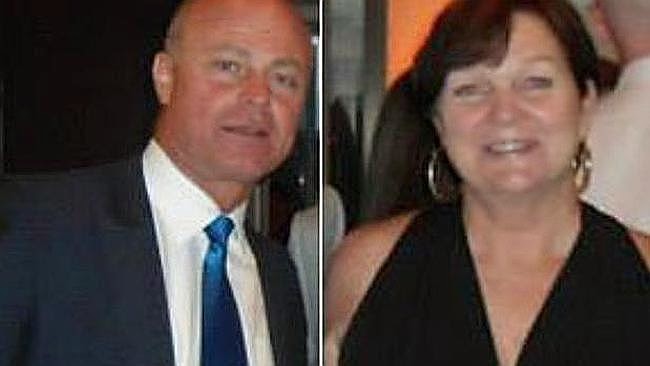 AUSSIE FAMILIES GRIEVE
Families throughout Australia have been left reeling in loss and grief for loved ones who were on board the Malaysian Airlines 777-200 when it was blown out of the sky above war-torn Ukraine.
It comes as passengers of a plane which should have been carrying some of the MH17 victims touched down in Melbourne.
Many who perished in the Ukraine crash were due to fly into Melbourne tonight on Malaysia Airlines flight MH126, a connecting flight Kuala Lumpur.
Victims Albert and Marie Rizk, of Sunbury, were travelling home from a month-long holiday with friends in Europe, and even tried to change their flight to avoid a lengthy stopover in Kuala Lumpur.
Their son James could still play football in Ballarat today for the Sunbury Lions despite only learning the tragic news yesterday.
Other Victorians not to make it home were Gerry and Mary Menke, Melbourne University student Elaine Teoh and her boyfriend Emil Mahler, Liam and Franke Davison, and Marci Grippeling. 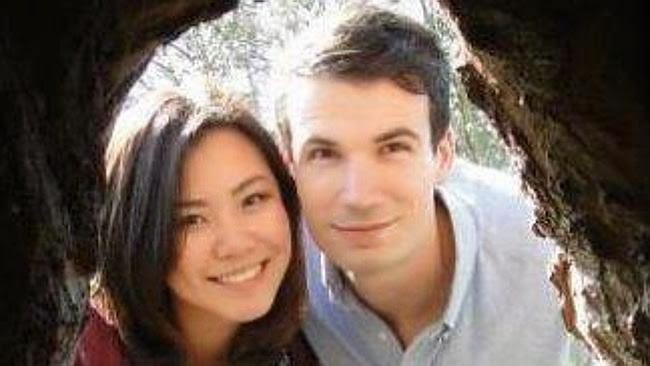 Melbourne couple Elaine Teoh and Emiel Mahler were travelling to a wedding in Malaysia when killed aboard Malaysia Airlines flight MH17.

AIDS HOPES DEALT A BLOW
THE world’s best hopes of curing AIDS were dealt a blow when MH17 was shot down.
Among the holiday-makers were brilliant scientists and medical researchers on their way to the 20th International AIDS conference, starting in Melbourne on Sunday.
Before takeoff some passenger had taken to social media sites, posting pictures of their tickets on the flight; others had sent photos to friends bragging of their business class upgrades.
When tragedy struck, those photos proved devastating confirmation to family and friends of their worst fears.
Among the 298 dead was prominent Dutch researcher Joep Lange, a pioneer in HIV research since the early ’80s.
He was the former president of the International Aids Society and his work included preventing HIV transmission from mother to child.
Other notable delegates who died were Dr Lucie van Mens, who since 1995 has focused on HIV and AIDS prevention, and the World Health Organisation’s Glenn Thomas. 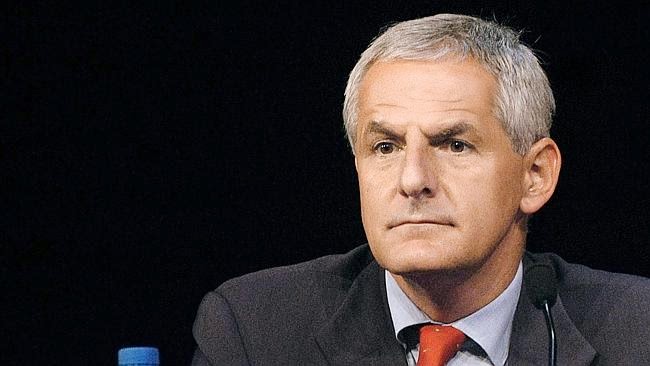 (FILES) A picture taken on July 14, 2003 in Paris, shows Dutchman and leading AIDS researcher Joep Lange during a conference on the matter.The world AIDS community was in mourning on July 18, 2014 with as many as 100 passengers reportedly on a crashed Malaysia Airlines plane heading to Australia for a global conference on the epidemic. Flight MH17 from Amsterdam to Kuala Lumpur, which US officials believe was hit by a surface-to-air missile over Ukraine, killing all 298 people on board, was due to connect with another flight to Melbourne. AFP PHOTO JEAN AYISSI

AIDS campaigners Pim de Kuijer and Jacqueline van Tongeren are also among the dead.
AMA Victoria president Dr Tony Bartone said those who died had “courageously and persistently” crusaded against HIV.
“This act of terror will be felt around the world, as no country is immune from HIV and we desperately need international researchers to eradicate this virus,” Dr Bartone said.
“It is with sincere gratitude that we pay respect to these researchers and acknowledge the groundbreaking work that they have done.”
In a statement, the International AIDS Society said the tragedy and the loss of life “is a truly sad day”.
It also paid respect to Mr Lange and lamented the impact of his loss.
“HIV/AIDS movement has truly lost a giant.”
RESEARCHER’S AIDS DEDICATION
Kirby Institute director Professor David Cooper said Dr Lange was a close colleague and friend who together established the HVNAT research centre in Bangkok that would now be his legacy.
“Joep had an absolute commitment to HIV treatment and care in Asia and Africa,” Prof Cooper said. 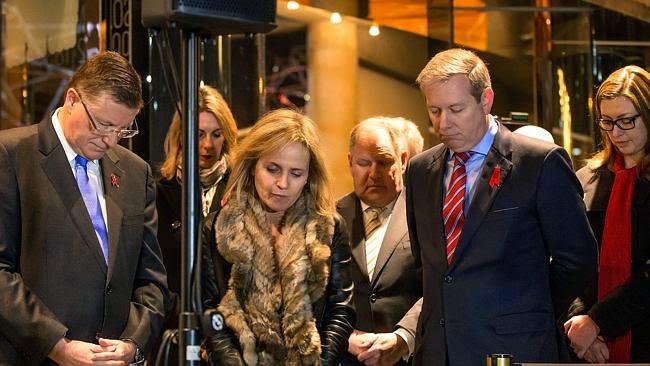 “The joy in collaborating with Joep was that he would always bring a fresh view, a unique take on things, and he never accepted that something was impossible to achieve,” he said.
Accomplished South African rescue helicopter pilot Cameron Dalziel was also on board.
Shortly before takeoff, Mr Dalziel sent a picture of his plane ticket to a fellow rescue pilot, said close friend Neil Noble.
”He was boasting about how he had been bumped up to business class and was going to have a fantastic flight. That’s how we knew he was on board.”
Mr Noble, lead paramedic for Team Australia EMS based in Queensland, said Mr Dalziel, 43, was a husband and father of two boys.
“In his time in South Africa he flew literally thousands of rescue missions with flight paramedics. He flew right across Africa, to Mozambique, Angola and in and around civil war-torn countries.”
He had also trained rescue pilots and was based in Malaysia but had been planning to move to Cairns.
“The irony is he worked in some of the most hostile regions in the world — Afghanistan and Iraq during the wars. He was a very accomplished and respected pilot.”
He would be a great loss, Mr Noble said.
Dutchman Regis Crolla posted a picture of his ticket on Instagram, writing “I’m so excited” before boarding the flight.
The five-day AIDS conference in Melbourne will hear from world-leading researchers and other high-profile speakers including former US president Bill Clinton and Sir Bob Geldof.
SAFE PASSENGERS’ HEARTBREAK
Passengers who boarded a Melbourne-bound flight that many of those killed on MH17 were supposed to be on said they felt sorrow for the victims of the attack.
Scores of people who perished in the tragedy were due to fly into Melbourne tonight on Malaysia Airlines flight MH126, a connecting flight Kuala Lumpur.
Greenvale man Ray Windlow said he heard about the rocket attack in which almost 300 were murdered as he left for the airport this morning.
“I couldn’t believe it. I had to ring my wife and say, ‘before you turn on the television, this just happened’,” Mr Windlow said.
“I felt a bit teary. I thought it was so unjust.”
He said he expected to board a half-empty jet but the flight was delayed for three hours to wait for passengers coming from Paris.
Mr Windlow said AIDS conference delegates on the flight were excited about coming to Australia but also struck by the loss of their colleagues.
Melbourne resident Jo Stevens said she had spoken to staff on the flight whose colleagues had been killed.
“They said they had close buddies on the flight,” Ms Stevens said.
She said they acted professionally under the heart wrenching circumstances.
“They were amazing. You wouldn’t have known there was a problem.”
Many people on the connecting flight were unaware of the tragedy and passengers said nothing of the deaths was said by airport staff or over the intercom.
The captain of the flight declined to comment.
Posted by Unknown at 11:10 AM