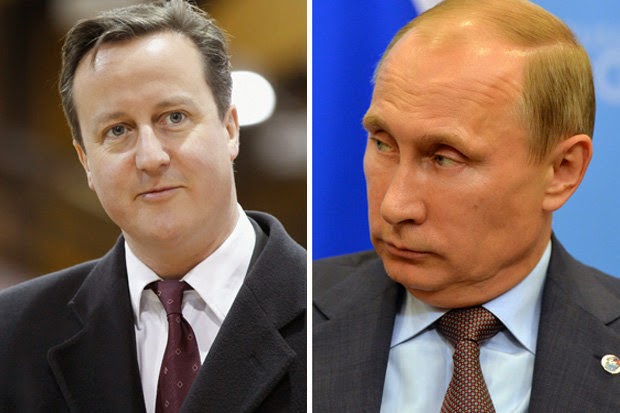 BLAME: David Cameron has blasted Vladimir Putin for his lack of activity [GETTY]


The Prime Minister spoke with the Russian president yesterday afternoon and blasted Russia's involvement in the crash calling for Mr Putin to end support for those responsible for this "appalling tragedy".
He added that the Russian rebels must give access to the crash site to give victims "proper funerals".
All 298 people, including 10 Brits, on board the flight from Amsterdam to Kuala Lumpur were killed in the crash in eastern Ukraine on Thursday.
It is believed the pro-Russian rebels shot a surface-to-air missile to down the plane.
Separatists in eastern Ukraine have taken control of the corpses from the crash.
Photos have emerged of the bodies of those onboard being piled onto "death" trains close to the site as the European bodies attempt to gain access to the site.
The Prime Minister said: "I've just spoken to president Putin. I made clear he must ensure access to the crash site so the victims can have proper funerals."
World leaders have shown their fury at Russia's involvement in the attack.
Putin has denied Russia having anything to do with the crash, telling the world to blame the country where the crash took place. 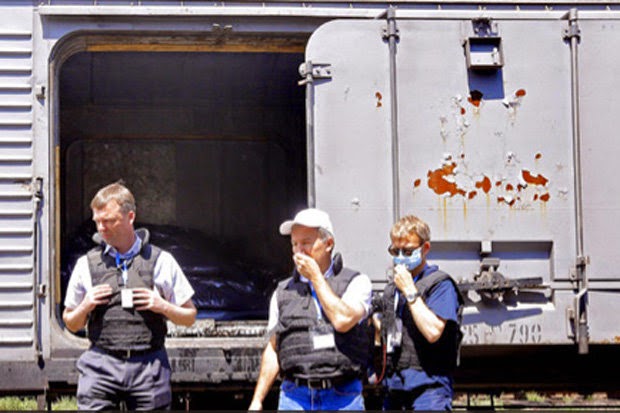 STORAGE: The bodies from the crash are being stored in a large refrigerator [EPA]

“I made clear he must ensure access to the crash site so the victims can have proper funerals.” - David Cameron
Reports say leaked phone calls from the Kremlin reveal how bosses ordered fighters to steal the black box from the wreckage.
The box is said to contain information about the flight's final movement that may unearth the truth about a possible Russian attack.
Rebels were the first on the scene and transcripts from the phone calls show pro-Russian separatists being ordered to hide the evidence before independent investigators arrived.
According to the Sun, a phone recording from last Friday revealed a rebel commander giving orders to his troops.
He said: "Our friends from high above are very much interested in the fate of the black boxes. I mean people from Moscow. Try to take everything that you find so that it doesn’t get into somebody else’s hands.
“Do it really quick. Urgently. Moscow asks where the boxes are.”
Mr Cameron has become increasingly infuriated by Putin with the Russian leader has refusing to take his phone call for three days
The PM told Mr Putin that Russia cannot stall any more.
A Downing Streets spokeswoman said: "The Prime Minister spoke to president Putin this evening and made clear that the shooting down of MH17 was totally unacceptable.
"The evidence suggested that pro-Russian separatists were responsible and the Prime Minister made clear that if Russia wants to put the blame elsewhere they would need to present compelling and credible evidence.
"The PM made clear that our priority is to get experts to the crash site so they can recover and repatriate the victims and collect any evidence necessary for the investigation.
She added: "The PM emphasised that the families of 298 individuals need to know that everything is being done to make this happen and called on president Putin to use his influence on the pro-Russian separatists to ensure this happens. The delay and restrictions so far were completely unacceptable and indefensible.
"The G7 and EU had repeatedly called on president Putin to cease support for the separatists and to work with the rest of the world to find a peaceful resolution. Russia's failure to do so had contributed to an appalling tragedy." 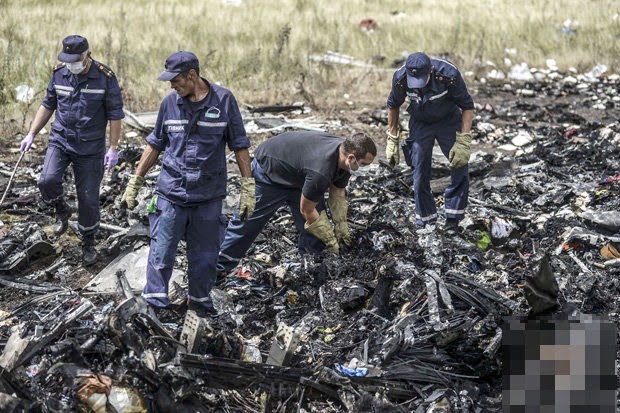 EU foreign ministers are said to be considering hitting Russia with sanctions for its lack of action.
Mr Cameron has suggested limitations on equipment sales and exportations to Russia.
They will meet in Brussels on Tuesday to have further talks over the matter as Mr Cameron faces two more days of intense
discussion.
In a final note, Mr Cameron warned Mr Putin: "The world was now watching and President Putin must change course and work to bring stability to Eastern Ukraine.”
A defiant reply to Mr Cameron's message comes this morning as the Russian leader told the Prime Minister such incidents should "unite people rather than separate them".
The defensive president added: "No-one has the right to use this tragedy for any kind of vested interest in the political sense. Such incidents should unite people rather than separate them.
"It is necessary that all people who are responsible for the situation in the region of Ukraine improve their responsibility to their own people, and to the people of the countries whose representatives have been victims of this crash.
"We need to do everything to ensure the security and safety of the observers and the experts working at the crash site."
Posted by Unknown at 11:46 PM