Athi Shankar April 26, 2013
Regretting that PAS has raised the issue now, the DAP chairman wants the PKR supremo to state his stand 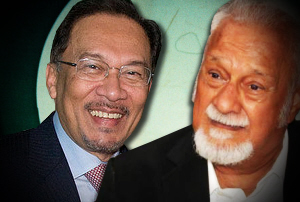 GEORGE TOWN: DAP chairman Karpal Singh today demanded PKR supremo Anwar Ibrahim to publicly declare his party’s official stand on PAS’ Islamist agenda.
Karpal said he was clueless as to why Anwar and PKR were playing dumb in this issue which had cropped up following statements by various PAS leaders, including president Abdul Hadi Awang.
“I don’t know why Anwar and PKR are quiet about the issue. Anwar should publicly declare his and his party’s stand on this issue. I think the public expects it.
“You got to ask him. I can only speak on the behalf of DAP,” Karpal, who is defending his Bukit Gelugor parliamentary seat, told a press conference here today.
Karpal regretted that PAS had raised the issue of hudud and Islamic state halfway through the election campaign despite the agenda not mentioned in Pakatan Rakyat’s common manifesto
He said he was taken aback by Hadi’s statement that DAP disagreed but did not oppose hudud and Islamic state.
“It’s contradiction in terms. When we disagree, it’s true that we oppose it. Otherwise there won’t be a disagreement. DAP’s stand on hudud is very clear.
“I’ve time and again said that hudud ought not be and should not be brought into the country,” he added.
Karpal insisted that his statements on PAS Islamic state reflected the official stand of DAP.
He said MCA was making an issue of it that the Lim father and son – Kit Siang and Guan Eng – were quiet about the issue and therefore they did not oppose hudud.

“I don’t state my personal stand. I speak on behalf of DAP. It becomes the stand of DAP,” he added.
Besides Hadi, PAS ulama council chief Harun Taib, deputy spiritual leader Dr Haron Din, Nik Mohd Amar Nik Abdullah have all issued statements stressing that PAS would implement the hudud law and its Islamist policies if Pakatan Rakyat takes over the federal government.
Pointing out that Barisan Nasional’s had exploited the issue, he called on PAS leaders to cease bringing up the issue.
He agreed that Pakatan had not reached a consensus on the PAS Islamic agenda.
But he said all Pakatan allies have reached a common understanding on other larger issues that the electorates would consider.
He said PAS leaders should rather highlight larger issues of public interest like the price of petrol, essential commodities, human rights and other economic issues.
Constitutional amendment needed
Nik Mohd Amar said that DAP’s willingness to use the PAS symbol when it had problems using its Rocket logo in this election showed that the party no longer feared PAS and hudud laws.
Karpal dismissed Nik Mohd Amar’s suggestion, claiming that DAP was prepared to use PAS’ logo in Peninsular and PKR’s logo in Borneo states in the event the Election Commission disallowed the DAP to use its Rocket symbol under the spirit of Pakatan cooperation.
He said just because DAP was prepared to use the PAS logo, it does not mean and cannot mean that the party agreed to PAS’ Islamist agenda.

Asked if PAS was holding DAP and PKR to ransom that “if you want our Malay votes, you support our Islamic agenda, Karpal promptly emphasised that “the DAP will not bow to such things.”
Harun has said Karpal’s statement does not matter as the implementation of hudud law was entirely up to the new parliament.
Karpal reiterated that there was no constitutional provision to allow an Islamic state, referring to a Supreme Court ruling in 1988.
He also reminded PAS that it cannot implement Islamic state without a two-third parliamentary support to amend the constitution.
When cited PAS managed to implement Islamist policies in Kedah, Kelantan and Selangor despite opposed by non-Muslims and DAP, he said there were only minor policies compared with the Islamic state and its hudud law.
“Our official stand is clear. The DAP is not for hudud and an Islamic state,” he said
Posted by Unknown at 6:00 PM