Leven Woon April 21, 2013
Malaysia Ex-Army Association’s chief Onn Mohd Yassin described former servicemen who supported the opposition as an “ungrateful” lot who sulked because they didn’t get enough from BN 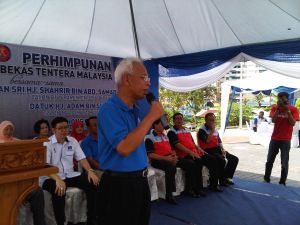 JOHOR BARU: PKR’s attempt to ride on Hashim Hussein’s reputation as a former army chief to attract Malay voters in the Johor Baru parliamentary constituency has hit a snag.


Some 200 former army officers, in uniform,  here rallied together today and loudly rejected him.


Calling Hashim “ungrateful”, the members of Malaysia Ex-Army Association’s (PBTM) Johor chapter gathered at a canopied spot outside the BN election operation room today and decried Hashim’s candidacy under the PKR ticket.
“PBTM Johor supports BN, rejects the hobo former general who joins the traitor of race, religion and country,” read one banner.
The emcee of the anti-Hashim gathering also led the crowd to read a pledge declaring their support to BN and Prime Minister Najib Tun Razak before BN’s incumbent candidate Shahrir Abdul Samad.
The emcee also led the crowd to chant “Vote BN, reject Hashim”.
PBTM Johor chapter chief Onn Mohd Yassin, in his speech, said ex-servicemen who supported the opposition were those who sulked because they did not get the things they wanted from BN.
“They are never grateful about what was given. They only want more,” said Onn, who is an outgoing BN assemblyman in the state.

Taking over the microphone, Shahrir first expressed gratitude to the crowd waving the BN flags before he went on to criticise PKR for using ex-servicemen in their campaign to bring BN down.
“PKR’s recruiting of ex-servicemen is nothing but a movie play. (PKR de facto leader) Anwar Ibrahim only intended to show the world that the ex-servicemen, corporate leaders and lecturers have risen against the  Najib administration,” he said.
“What do PKR and Anwar have in mind for the future of Malaysia? Reduction of fuel price?
“This has proven to be inapplicable in Indonesia,” he said, adding that Indonesia is now suffering an economic backlash due to heavy subsidies on fuel price.
Confident Shahrir
Speaking to reporters later, the long-serving JB parliamentarian said he is confident of retaining Chinese and Malay voters in his fold.
Shahrir also dismissed the prospect of Hashim luring away the civil servant votes
“I don’t think so the civil servants would not be inclined to vote for him just because he is an ex-serviceman. They also would judge what values the party brings,” he said.

On the Chinese voters, he said the state had historically enjoyed a “fantastic” communal relationship, as evident through the Foon Yew Chinese Independent School in JB and other Chinese associations which had been receiving government aids.
“In Johor, we always stick to the principle that when it comes to community issues, we better don’t politicise it.
“(DAP supremo) Lim Kit Siang can come and rally the Chinese to stand up, but are you sure this is the way?” he said.
With Shahrir getting an early boost from PBTM today, Hashim has 14 more days to prove that he is indeed a serious to the former minister who has held the seat since 1978.
Posted by Unknown at 8:48 PM