Leven Woon| March 21, 2013
Rahim Thamby Chik claims that businessman Shazryl Eskay Abdullah has been offered 'any amount' to retract his allegations against Anwar 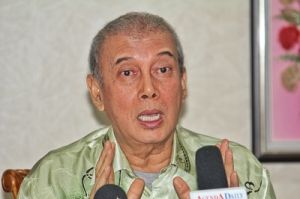 
Rahim, who together with Eskay and Perkasa’s Shuib Lazim, had revealed the sex video in 2011.
The former Malacca chief minister claimed that the offer was made to Eskay via a man believed to be Anwar’s runner.
“First he was tailed, then he was contacted and given such a offer. All he needed to do was to sign a statutory declaration and make u-turn on his previous allegation. In return, he would receive any amount that he wanted,” Rahim told a press conference.
Eskay was however absent and Rahim said this was due to security reasons.
The video in question showed a man resembling the opposition leader having sex with a woman. Anwar has since denied that he was the one in the video.
Rahim said today that unlike Eskay, Shuib and him had not been approached by anyone thus far.
He stressed that regardless of any lucrative offer, the group would stand firm by the allegations that the man in the video was Anwar.
“The Dato T’s struggle for truth is not for sale,” he said.
“Anwar can save his time approaching us. I am not that kind of person who would make about turn half way,” he added.
The former Malacca chief minister said he had not had the chance to showcase detailed forensic evidences that prove Anwar to be the man in the video.
“He once said should I repeat the allegations, he will sue me for RM100 million. Now I am repeating it, and if it is found true I shall file a counter claim against him for RM100 million,” he said.
Meanwhile, when asked about the latest photos showing a man resembling Anwar with another man in compromising positions, Rahim said he had yet to see the photos and would let people  judge it
Asked whether he think Saiful Bukhari Azlan’s father was approached in a similar fashion to make favourable statements on Anwar, he said he do not know.
Saiful’s father, Azlan Mohd Lazim had dropped a bombshell by saying that Anwar did not sodomise his son and he was a victim of vile political conspiracy.
In a related matter, Rahim also urged the authorities to probe into Yuktes Vijay’s statement several Datuks had been funding Anwar in his defence of the Sodomy Trial II.
Yuktes wrote to FMT last week and accused the Datuks of footing bill for  several experts including Brian Macdonald and Dr David Wells to defend Anwar during the trials.
Rahim said it is the government duty to find out whether the Datuks were Anwar’s local proxies or overseas funders and how they operated.
Posted by Unknown at 11:40 PM